Although it’s not a massive city as East Asia is concerned, getting an idea of what to do when creating a 3 day Taipei itinerary can be complicated. Most Taipei travel guides you find online provide many details, but few insights.

Mine is not one of those. Whether you’re seeking recommendations for 5-star hotels in Taipei, or want to know exactly how to structure your trip, I’m going to cut right to the chase.

The less energy you waste planning your trip, the more you can devote to enjoying it. Whether you end up staying 2 weeks in Taiwan, or visit the city on a long weekend from elsewhere in the region, a straightforward approach is the surest way to luxurious 3 days in Taipei.

Best Place to Stay in Taipei

Before I get to what to do in Taipei, let’s discuss the best district to stay in Taipei. I’ll start with a caveat: Hotels in Taipei (and Taiwan more generally) can leave something to be desired, if you’re not careful. Many properties are older, and since Taiwan doesn’t have as broad a tourist appeal as, say, Japan or Korea, these often aren’t kept as up to date.

The Best Hotel in Taipei

With this being said, there are a few luxury hotels in Taipei I can recommend. These include Zhongshan District’s Okura Prestige and Kimpton Da’an, which is just steps from the Zhongxiao Dunhua retail and restaurant mecca. The W Taipei is also always a good choice if you’re looking for a hip and fun atmosphere that offers impressive views of the Taipei skyline in an excellent area with great nightlife.

If you prefer a homier stay and more affordable option, on the other hand, check out one of the higher-end Airbnb apartments in the Da’an and Zhongzheng districts, preferably close to Da’an Park or Dongmen stations of the Taipei MRT.

With just 72 hours in Taipei, you should definitely spend at least one day seeing the city’s main attractions. Start at Longshan Temple in Ximen, stopping at Chiang Kai-Shek Memorial Hall before heading down bustling Xinyi Road to Taipei 101 for some of the best shopping and views in Taipei. Hike up Xiangshan (AKA Elephant Mountain) to watch the sunset behind the city, then return to Ximen to walk amid neon lights in Ximending pedestrian area, a fun and trendy entertainment and shopping district.

Regardless of your travel personality, eating is an essential element of what to do in Taipei. For starters, street food at famous night markets like the ones in Shilin and at Raohe Street are a must. (Be sure to click on the night market names I’ve provided for a list of what to try!) For even more iconic Taipei eats, go local with delicious xiaolongbao dumplings at the original Din Tai Fung restaurant on Yongkang Street in Dongmen.

Cafe culture thrives among the youth and young adults in Taipei. For the best cafe in Taipei, check out Taipei Coffee Time. And For the best brunch in Taipei, head over to Avenue. Of course, no foodie excursion around Taipei is complete without some refreshing bubble tea. Try one of these best bubble milk tea in Taipei spots.

Taipei has a variety of natural terrains that should not be overlooked. On day 2, consider exploring the city’s natural beauty. Hiking is one of the best free things to do in Taipei and there are many hiking trails to venture on. Xiangshan is the most easily accessible of the best hikes in Taipei, but it’s not the only game in town. Especially adventurous hikers will hit the trails of scenic Yangmingshan National Park, located atop an active volcano with sweeping views of Taipei’s city center. Another awesome Taipei hiking destination is Maokong, located south of the city (and accessible via a cable car system called the Maokong Gondola, in case you aren’t feeling energetic).

Just as Xiangshan is not Taipei’s only hiking trail, it’s not the city’s only viewpoint. Visit Bishan Kaizhang Shengwang Temple in Neihu to see the Taipei skyline framed by colorful dragons and phoenixes. Lao Di Fang lookout, meanwhile, is an awesome spot to watch planes land over the city at Songshan Airport. Finally, you can also ascend the Taipei 101 Observatory, assuming you can escape the high-end shopping in the mall beneath it.

After a morning of taking in the sceneries, balance it out with a little Taipei shopping. From shopping malls to night markets, there is something for everyone. I’ve already covered a few of the top night markets and shopping districts, but shopping malls are a consumer staple, too. If you want to skip the luxury shops of Taipei 101 for a more authentic route, the best bargains and discounts can be found at East Metro Mall. For all things gadgets and electronics, Guanghua Market is where you want to be.

More great shopping options include the bespoke luxury shopping mall, Bellavita; or for crafts and souvenirs, a good choice is the Jianguo Weekend Jade and Flower Market.

On day 3 of your Taipei trip, consider going off the beaten path. If you only plan to explore the city center, two days is probably enough. If, on the other hand, you plan to take day trips from Taipei, three days in Taipei is the minimum. My favorite excursions from Taipei include the former gold mining town of Jiufen and seaside Keelung, famous for Miaokou Night Market and colorful Zhengbin Fishing Harbor.

How to Get Around in Taipei

The good news? Taipei has one of the most efficient, easy-to-use and comprehensive metro systems in all of Asia, and it’s seamlessly integrated with an extensive urban and suburban bus network. The better news? If you can’t be bothered to use public transport, there are plenty of ways to get around town without having to hire a Taipei private car service.

For individual trips, Uber cars are plentiful in Taiwan, and the drivers are courteous and professional. If you need a car for a day, on the other hand, most every hotel in Taipei that has a concierge desk can arrange a car and driver for a day. Many such drivers will speak English, but to make sure no lines of communication are crossed, tell the concierge all the things to do in Taipei you’ve decided so he or she can dictate your wishes in Chinese.

Summers in Taipei are hot, humid, and rainy, so they aren’t the most ideal months to visit. For the most favorable weather, opt to visit Taipei in the spring months of early March through mid-May. Spring is a beautiful time in Taipei where cherry blossoms bloom in city parks and skies are sunny and clear. Another good option is to visit in the fall, when the typhoon season of summer comes to a close. During the autumn/fall, the weather is crisp and cool, making it perfect for walking around the city. Lastly, winter months are also mild, with temperatures usually not dropping below 50 degrees Fahrenheit. If you don’t mind slightly chillier nights, the end of the winter season is a wonderful time to visit Taipei and experience their Chinese New Year and Lantern Festival.

Where to Go in Taiwan (After Taipei)

Many urban-minded travelers will ride Taiwan’s high-speed rail straight from Taipei to Kaohsiung, the country’s southern metropolis. If you have a good amount of time, however, you won’t want to miss the trio of cities between them. From Taiwan’s ancient capital Tainan, to rough-and-tumble Chiayi, to Taichung (which, among its city-center treasures, is also just a stone’s throw from Sun Moon Lake), Taiwan’s cities are worth exploring.

Other travelers will want to take Taiwan road trip along the country’s scenic east coast, although you should make sure you get a valid International Driving Permit before touching down. From Taipei, you can drive east to the city of Hualien, then drive through the rice fields of Yuli before arriving in underrated Taitung. If you continue all the way south to Kenting National Park, make sure to stop at stunning Taimali Beach en route!

Whether you navigated here because you wanted to know exactly what to do in Taipei, or prefer to pick and choose items I’ve listed, I’m confident you now have what you need. Taiwan’s capital is far less complicated—and far more accessible—than some travel guides would have you believe. Moreover, while it’s not as conspicuously glitzy as Seoul or Tokyo, Taipei has a simplicity about it that becomes its own sort of opulence. I can’t wait until you can taste the xiaolongbao for yourself!

About the author: Robert Schrader moved to Taiwan in 2019, and created Taiwan Starts Here to relay his insider knowledge to an English-speaking audience. Whether you’re planning a city trip to Taipei or a road trip along the island’s scenic east coast, this is your one-stop shop for Taiwan travel information—and inspiration. 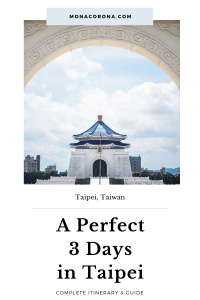